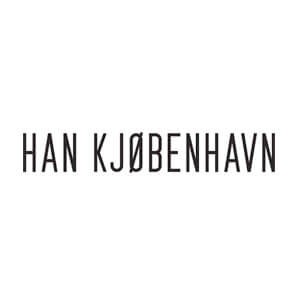 Han Kjøbenhavn is a Danish brand founded in Copenhagen by Jannik Wikkelsø Davidsen in 2008. The brand started out by designing glasses, and to this day their sunglasses are still a big part of the brand. Since then, Han Kjøbenhavn has become a popular menswear brand.

Han Kjøbenhavn is known for its fantastic fit together with the use of materials such as neoprene, mesh, and PVC. The brand finds inspiration from timelessly Danish designs and old school working clothes. When Han Kjøbenhavn shows off their new collections, they produce short films where they use all kinds of personalities to give insight into how Han Kjøbenhavn sees their own brand. Han Kjøbenhavn has also become an approved international brand and they work together with big brands such as H20, Puma, and New Era.

The Daily collection is Han Kjøbenhavn's selection of basic styles for the everyday life, that is indispensable for your wardrobe. These styles are classic and simple and that is what makes them usable for every age group. The collection consists of t-shirts, hoodies, and sweatpants. All the styles in the collection are made of premium cotton and are embroidered with Han Kjøbenhavn's logo.

The stylish looks since 2008

Han Kjøbenhavn was first released in 2008, and since then it has only progressed for the Danish brand we all know nowadays. The brand, founded in Copenhagen by Jannik Wikkelsø Davidsen, first focused on sunglasses, which also still form a large part of the brand, but later the brand has also moved on to modern clothing such as Han Kjøbenhavn tracksuits, Han Kjøbenhavn beanies, Han Kjøbenhavn jackets, and Han Kjøbenhavn dresses. The change turned out to be a good idea, as the brand was named by Complex in 2013 to be among the top 15 menswear brands in all of Scandinavia, and later in 2014 they were also ranked in the top 8 on GQ's list of "must-know Scandinavian menswear".

From Copenhagen to the rest of the world

Shop for Dickies at Streetammo